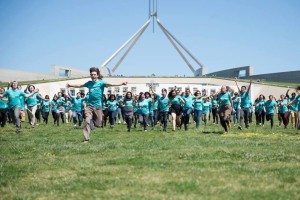 For the last few months I have been invested in Oaktree’s End Poverty campaign. Oaktree is Australia’s largest youth run not for profit and is an organisation of young people leading the movement to end poverty. One of the major policy asks of the campaign is tax justice. The scale and severity of the loopholes in our global tax system are astounding. I had no idea about these issues until the Oaktree campaign, and most people still don’t know. And that’s the thing; large multi-national corporations and affluent business people continue to get away with it because the general population isn’t aware. Because they don’t know, they don’t speak up about it. Without any interest in the issue, governments don’t act. But we’re speaking up now, and we demand they listen.

Here’s the deal. In the last twenty years we’ve seen global poverty halved. That’s phenomenal. However, there are a few major roadblocks preventing us from going that last mile. One of these is the failing in the global tax system. In 2010 an estimated one trillion dollars was lost from developing countries through tax evasion. Each year Africa collectively looses more money through tax evasion than is donated in foreign aid. This is HUGE. Australia too looses out through tax evasion and so tax justice has been placed on the agenda for the G20 being held in Brisbane this November. But we want to make sure that the voices of the developing world are heard and fairly represented. The three asks of the End Poverty Campaign are to achieve:

Essentially what it means is that there would be a much greater transparency and level of accountability within the tax system, which means that tax would be paid where tax is owed. One of the other major obstacles on the road to alleviate poverty is the lack of commitment made by our world leaders. Enter the Australian government. When the member states of the UN committed to the Millennium Development Goals (a set of eight goals to half world poverty by 2015) in 2000 they committed 0.7% of their GNI to foreign aid. This means 70c in every $100 of Gross National Income spent on foreign aid. Do you know how much Australia currently gives? Go on, guess!

I Bet you thought it was higher than 0.33%. This is appalling and the lowest rate we’ve ever been at. The frightening thing is that this is going backwards with no commitment to increase.

According to the government we need to get our budget back on track and into surplus before we can help the worlds poor. They use the analogy that we can’t borrow from foreign countries to give to other countries. Does that then mean that someone with a mortgage can’t donate to charity?

If you know me personally you’re probably aware that I’m equally passionate about the social injustices that occur here in our own backyard. But Australia is one of the most well of nations. We have the capacity to both address challenges here at home and commit more to foreign aid. Despite the financial issues the UK are facing they are committed to 0.7% in a bipartisanship agreement that have guaranteed won’t change. Being poor in Australia is a world of difference to being poor in a developing country. As hard as things can become here you know you can see a doctor when you’re sick and not have to pay. You can turn on a tap and drink clean water. You can seek food from Vinnie’s when you have none. We are so privileged and so fortunate to call Australia home. We have a moral responsibility to the world’s poor. I firmly believe that the place of your birth shouldn’t be what determines your opportunities and quality of life.

I was one of four hundred young Australians who paid $400 and gave up their entire mid-sem break to travel on the End Poverty Roadtrip. We travelled through communities sharing our message and gaining support for our petition. When we all arrived in Canberra we meet with over 80 MPs about the issue. I’m not going this much from you. But I am going to ask that if you want to let our government know that you care about ending poverty please share your voice to the petition at Oaktree.org/endpoverty. Here you can also read more about the issues. It is so important that we keep the conversation going, raise awareness, question our leaders and let them know we care.

An Ode To The Tram

I never actually mean to jump on the tram But sometimes things happen: do you feel me fam? It’s quick and convenient, it’s always…