Australia is known as the lucky country. It has been multicultural hub of the oceanic region since the mid-1960s and the end of the White Australia Policy.  We are lucky in having both one of the oldest cultures in the world, alongside a diverse and beautiful immigrant history.

Unfortunately in this nation of cultural exchange and change – with one in four Australians being born overseas – the White Australian rhetoric continues to leave its sticky fingers over our public debate. The rise of an alarmingly vocal and widespread culture of racism and xenophobia was revealed over the Easter break with the Reclaim Australia Rally breaking out in Fed Square.

The ultra-nationalist rally in Melbourne was only a part of a nation-wide protests against the apparent ‘Islamification’ of Australia. These types of protests have, sadly, become part of a common trend across the West with similar ultra-nationalist, anti-Islam protests appearing in Germany, America, the UK and Belgium.

Sweaty flag draped protestors held crudely made homemade signs that read  “You keep your Burqa, I’ll keep my Clitoris”, “The Koran produces terrorism”, “Islam is an enemy of the West”  and “No Sharia law”. Other protestors who held ‘official’ Reclaim Australia posters advertised “Reclaim: Our Laws, Our Ways, Our Nation” and claimed to be “reclaim[ing]” gender equality, free speech, democracy and (perhaps most ironically) tolerance “of our ways”.

Particular fears of Halal certification were provoked by discussions in parliament by members like Jackie Lambie (Independent) and Cory Bernardi (Liberal) and former politicians like Pauline Hansen (One Nation).  Bernardi called the halal certification industry a ”certification racket “and requested that a government inquiry be made into “where the money paid actually ends up.”

It is talk like this from politicians that spark irrational fears, such as the claim that halal certifications “fund terrorism” (Hansen). These fears trickle down into the community to inflame individuals who then demonstrate with poster like: “Abbot! No Halal Certification” and “Reclaim food free of halal”.

The Reclaim Australia protests were a disgusting display of fear and ignorance. It is perhaps unsurprising that the organisers of the rally had to remind their members not to bring their “Neo-Nazi/White Supremacist Banners/Placards”

Unsurprisingly counter demonstrations were organised to block the Reclaim Australia rally. Protestors with signs that read “Stand up to racist scapegoating” ”Racists go home” “Racism is a disease – education is the cure” and “No room for racism” attempted to block access to the rally. The human wall of counter-protestors separated some of the Reclaim Australia demonstrators from the main block.  This resulted in tension between both sides, with outbursts of aggression common throughout the day. A heavy police presence monitored both sides and were quick to disperse violent clusters.
While I watched these clashes unfold I stood among the crowd and realised my utter disappointment with my country. I looked into the Reclaim Australia crowd and saw nothing but the red, blue and white of our national colours. Everywhere you looked the Australian flag and the Southern Cross were splashed with racist and xenophobic slogans. The flag and stars paraded before me like a mockery of what I though Australia was about. The flag no longer could represent to me the open and accepting country, but rather had been perverted into a symbol of ultra-nationalistic bigotry.  The Southern Cross, which should represent the diversity of our hemisphere, is now tattooed on the backs of teenage yobbos or draped around sweaty angry forty year old complaining about halal certifications.

The appropriation of the Australian flag by these racist groups has made me physically uncomfortable with our national symbol. Instead of bringing me pride, it gives me shame and instead of giving me hope, it reminds me of our nation’s worst moments. 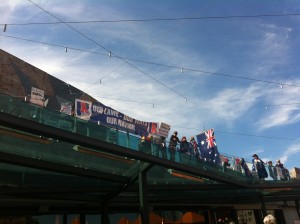 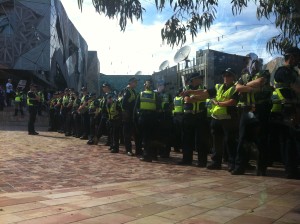 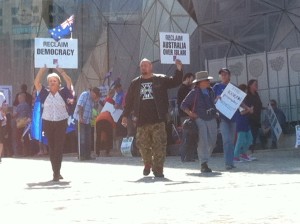 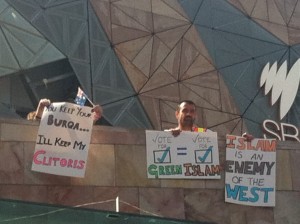 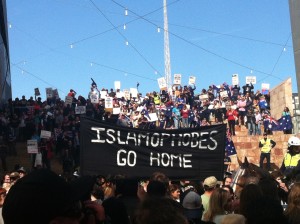 If you look to the high-table, you will see an elegant portrait of Mavis Jackson, MBE. Indeed as some of us walk( or stumble…