Hi, my name is Jade and I think I have FOMO. 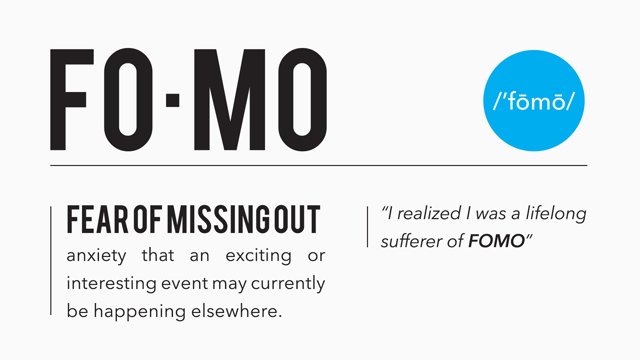 Just last week a bunch of my best friends and family went to the Coldplay concert, and it didn’t matter that I knew most of them didn’t even know half the songs on the set list (or maybe they did and I was just being jealous af) or that I’ve waited about 7 years to see them. No matter how badly I wanted to be there, whether for the reason of getting lit with my friends or to see Coldplay, it was simple fact that I couldn’t, not while I was an entire ocean away. And yeah, it really sucked to see all the videos and pictures they shared on EVERY. SINGLE. SOCIAL. MEDIA. PLATFORM.

Okay, and to be honest the concert dates were released months ago and I totally set a reminder to myself to not check social media on those two days. You know, just so the FOMO wouldn’t go full out crazy… Not like that strategy worked anyway.

Freaking out as someone with FOMO is like when your friends randomly plan to have a party on that week itself, and you can’t go because you already booked a really expensive ticket to an event, that so happens to coincide at the same time. So you end up going to the event but wonder the whole time what you’re missing out on, if any new inside jokes were made that you won’t get at the next meet up, or if someone shared a vital piece of information that you won’t know because you weren’t there. Or you know, if someone got stupidly drunk and you missed out on the hilarity that ensued.

Even if someone fills you in on the events that happened or you watched what went down on Snapchat, it’s just not the same. You missed out on having that live first reaction to whatever was happening with everyone, you didn’t get to cry out or laugh hysterically with them.

Honestly, it’s 2017, why is teleportation not an actual thing already? Or cloning even! Only then people with FOMO will be able to live in peace and not constantly suffer with all the ‘what if’s. But until then, I guess we’ll just have to completely immerse ourselves in the present moment and enjoy all that it has to offer to us, as cliché as that is.

IH dinners are getting very long and arduous these days so here is your friendly 7 step guide on cutting those lines, pleasing your…