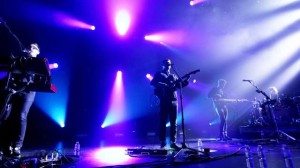 “She may contain the urge to run away, but hold her down with soggy cloths and breezeblocks”.

You’ve probably all heard these iconic lines in the summer of 2012, when the Leeds-based indie rock band Alt-J (also known as ∆) released their famous number-one hit Breezeblocks. The band, formed in 2007 in England, only reached fame after the release of their award winning first album: An Awesome Wave. Following the success of their LP, they toured the world and filled concert halls and countless stadiums, presenting their album live in every corner of the world. I had the chance to catch them last year, during their one-night stop in Melbourne, and was more than excited when they announced the release of a new CD. Their second opus, entitled This Is All Yours, is far from matching the level of perfection of An Awesome Wave. It does offer a variety of great, alternative and catchy tunes (for example Bloodflood pt. II, Nara, Every Other Freckle), but doesn’t have the same fluidity, the same impact as their debut record. Even though I did not instantly fall in love with this second album as I did the first time around, I was more than excited to see their live show again, and see how their new songs would translate to the stage.

This time, Alt-J opted for a smaller, more intimate venue: the iconic Forum, on Flinders Street. After a very brief opening act by the up and coming artist Grace Woodroofe, all the lights went off in the room. The first notes of Hunger of the Pine, their brand new single, echoes in the Forum. The band seems to have technical difficulty at the start of the show: lead-singer Joe Newman’s microphone is clearly not on and drummer Thom Green is out of sync. After a terrible start, Alt-J manages to get the crowd dancing and singing along to old hits such a Fitzpleasure (and electronic song about gang rape) and Something Good (one of my personal favourites). After playing a fair few songs from their first album, they experiments a bit with new songs. The groovy Left Hand Free gets the audience to jump around,and the more alternative Warm Foothills gives the show a very intimate feel. My personal highlight of the night was definitely Bloodflood part I and II, who left the crowd tearing up with emotions.

After a very short set (about an hour), they leave the stage, only to return a few minutes later for an encore. After playing a cover of Lovely Day by Bill Withers, they go straight into a new track called Nara. This song “is named after a city in Japan where there are deer that wander freely all around the city and so the song ‘Nara’ is about gay marriage and kind of saying ‘it’s ok if people want to marry people of the same sex as them because they’re not hurting anybody’. …people should be allowed to live like a deer in Nara: freely, doing what they want without anyone telling them what to do” tells Gus Unger-Hamilton, the band’s keyboard wizard.

After a brief pause, Alt-J ends their show with not-so-unexpected crowd pleaser Breezeblocks. Everyone dances and sings along.

Then, as soon as the last note is played, all the lights go back on and it’s already time to leave. Even though Alt-J is not the best live-band ever and most of their songs do not translate to the stage, I leave the forum with a smile on my face, and satisfied. Catch them at Falls Festival in Lorne (VIC), Marion Bay (TAS) and Byron Bay (NSW) over NYE.

A Call to Arms

To celebrate the birth of the new high tech Globe website. We should step back and think about all that we take for granted…